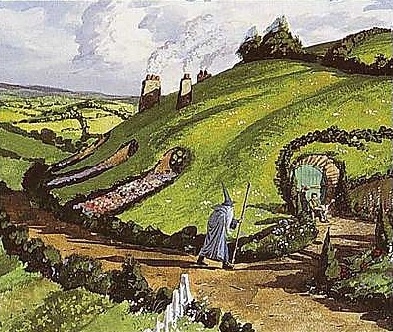 I think we all have that one book that spoke louder to us than any other book we’ve read. A book that inspired us, sparked a fire within us and transported us to new worlds far beyond our imagination. For millions of people, myself included, across several generations and continents, that book was and is The Hobbit by J.R.R. Tolkien. Yesterday, 80 years ago in 1937, the Allen & Unwin publishing company could have never understood the enormity of the book they had just put on the shelves. What started out as a brief, unimportant sentence scribbled onto the back of a graded college essay would evolve into one of the greatest fantasy epics of all time and transform the literary world. Tolkien wrote, “In a hole in the ground there lived a hobbit” on the back of an essay he was grading. He had no clue what it meant or what a hobbit was, but the story only grew from there. For generations, that sentence would come to mean so much. If I could ever buck up the courage to get a tattoo, I would love to have this sentence in script font on the inside of my right arm, my writing arm, as a reminder of its solid inspiration.

September 21 is the official publication date of The Hobbit, but we Tolkien nerds celebrate September 22 as Hobbit Day because it is the birthday of both Bilbo and Frodo Baggins (though separated by some years), the two heroes of The Hobbit and The Lord of the Rings, respectively. What makes this day so special to those of us who celebrate? It’s a time to reflect and appreciate the marvels created by Tolkien and carried out after his death by his son and editor, Christopher Tolkien.

I remember reading The Hobbit as a young kid, maybe about eight years old, and I enjoyed it. I loved it! Hoarded treasure, dwarves, elves, DRAGONS!!!! What eight-year-old wouldn’t love that?? However, it didn’t resonate with me as a classic or something to be revered until my late teens when I firmly immersed myself in Tolkien fan culture. I was in high school when Peter Jackson films came out and, although I’m somewhat ashamed to admit it, I had not read The Lord of the Rings when I watched the films. As a librarian today I scoff at those who say, “No, I didn’t read the book, but I saw the movie!” I want to slap those people. But in high school, as we all know, we think differently. We have different priorities. Even though I loved reading, it never occurred to me to read the books first.

But after watching those movies…oh boy! I became OBSESSED! I had never before been so fascinated by a story. The scenery, the artwork, the characters (especially the yummy looking ones!), the language, the script, everything about it made me want to live in Middle-earth. The level of escapism it offered to me made my imagination run wild! Does everyone remember when MySpace was big? Before social media really became a thing? I had a MySpace and was heavily involved in online roleplaying. My best friend and I wrote fanfiction. And before you judge me for being a fangirl, keep in mind that I always liked writing. I used my fan fiction, which I NEVER officially posted online, as a writing exercise to see how far I could expand the Tolkien universe. I used pieces of my fanfiction in my roleplaying and it was FUN! So much fun!

I began to realize that if there was something so special about the movies that created this drive in me as a writer and as a creative human being, there had to be something downright amazing about the books. So I picked them up. And I fell in love. Today, the first book I read every year is The Hobbit because, for me, there is no better way to start a new year than with an adventure.

I’m interested in hearing your testimonies. What does Hobbit Day mean to you? If Tolkien’s works do not mean that much to you, what other books or authors do? Share in the comments below and be sure to always cherish those books that mean so much to you and share them with others!