A few years ago, I started doing “visual exercises” where I took an image and created a scene with it.  I want to get back into doing that for two reasons:

I love the image I’m going to use today.  The town reminds me of Bree from Peter Jackson’s The Lord of the Rings films, but the hanging man reminds me of something you’d find in a Game of Thrones episode.  Let’s see where this image takes me today. 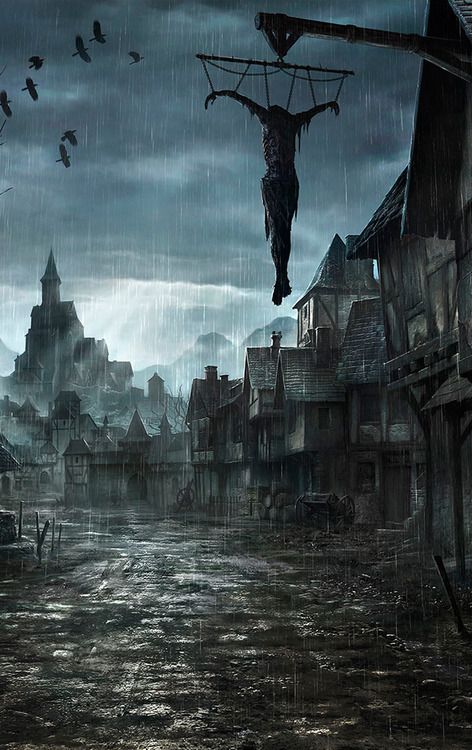 Grayson did not want to be here.  This place was cursed, for sure.  Perhaps at one point in history this place was a thriving street market, complete with food carts and wagons from the outlying farms.  Today it was a ghost town; a dark, wet, depressing ghost town.  Every step he took led his boots through a sloshing mud puddle.  He looked up toward the castle on the sharp, jagged rocks staring down on the village.  The look of it made him shiver as he pulled his black cloak hood over his head.  He stepped out of the shadows and rounded the corner to be faced with a grim sight.  Straight ahead hanging high above the street was the body of a man, flayed, beaten, and already torn apart by the crows, and his arms and neck were wrapped in chains.  Grayson stopped dead in his tracks, stunned by the image.  He had never seen a dead man before.

“Oiright, lad!” A booming voice greeted him from the doorway of one of the village shops. “Lost your way, have you?”

Grayson pulled his collar up around his neck to hide the colors of his garments and pulled tighter on the hood.  Though no one would recognize his face here, he could not risk that they would guess he was from another kingdom.  He walked away quickly before the man could shout at him again, the hanging man swinging in his chains and the crows shouting at one another above.

As he ducked into another alley, he almost tripped over a rat scurrying away from the street.  No matter how hard he tried, he could not get the image of the hanging man out of his head.  The vivid sight, he was sure of it, would haunt his dreams for at least a few nights.  This was a much more dreary place than he originally thought.  The king more devious and dangerous.  Perhaps this meant the king was loosing his head and making rash decisions, like flaying his people and hanging them in the street.  Perhaps this was what he had wanted to do all along in Grayson’s kingdom, but was never given the opportunity.

Whatever the reason, Lord Grayson of Brendt House was here on a mission, and he could not cause himself to lose sight of that mission.  He was on a mission for his Queen, and she would have the answers she required of him, no matter what the cost.

One thought on “Visual Writing”