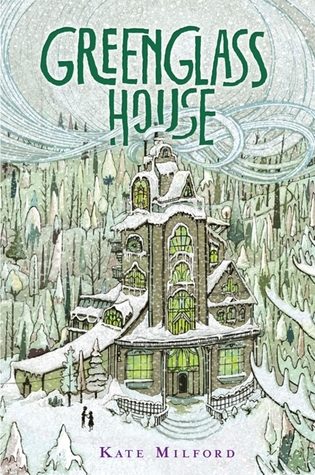 This book made it onto the Battle of the Books list for 2016-2017 in North Carolina and I absolutely loved the cover. Yes, I judged a book by its cover. This book was adorable and I loved it. The main character is an adopted boy and of course, I took a liking to him straight away for that. Milo is Chinese so every time people look at him with his family, they already know he’s different. I never had to deal with that, but I can certainly see how that could be conflicting for a young child. He is a relatively boring child, if I’m not being too harsh, but that all changes when he meets Meddy, the cook’s daughter, at the beginning of what he’s hoping will be an uneventful Christmas break. A bunch of random, mysterious guests arrive who all have connections to the inn that Milo’s parents run at Greenglass House. Meddy is an adventurous child and forces Milo to use his imagination in order to play with her. Together they discover secrets of the house and its guests, and they also put their nose to the ground to try and recover lost items that go missing from the guests. From the very beginning this book hooked me into the plot. It was almost like a kid’s version of Clue, trying to figure out who is who in the house, how they’re connected to it, who stole what from whom, and how to catch them.

The message in this story was very heart-warming as well. Adopted kids, even kids like me and Milo who were adopted as infants and never met their birth families, are always going to be curious about their biological families. But family is not defined by DNA. It is defined by love and that is the lesson that Milo learns. This book is on the middle school list but I recommend it to anyone who loves an adventure and imagination.