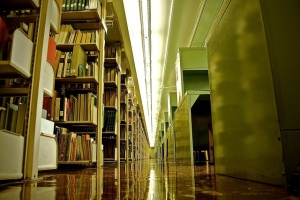 This is a story that is near and dear to my heart because it takes place on the campus of my Alma Mater, Penn State.  This November will mark the 46th anniversary of the mysterious death of Betsy Aardsma, the young grad student whose murder in the stacks of the library was never solved.  Her memory will live on especially in the minds of those who attended Penn State and definitely felt her presence in those stacks.  While this story is not based on a true story recounted to me personally, I am sure there has been more than one student since 1969 who has felt the unease in the Level 2 stacks of Pattee Library.

No one was allowed in the library fifteen minutes prior to closing. The building was huge, and Becca understood that the Pattee Library staff did not want to have to worry about students getting locked in the stacks after they locked the doors. Her class across campus had let out late and she had to find something to help her start her research for tonight’s assignment. She had no choice but to slip in unnoticed. She’d be out in no time anyway.

Her favorite place in the stacks of the Penn State library was a little nook in the west corner of level 3B which very few people even knew about. It was tucked away between a wall and a bookshelf, so no traffic would bother her. There was a small window which overlooked the beautiful campus and allowed her to escape every now and then from her studies. The small table and solitary chair was located only a few aisles away from the rows of books where she found most of her history material. Today, however, she would not be enjoying her favorite spot. She only had time to run down the small, confined, and winding stairway to level 3B.

She quickly walked to the row she needed, turned the aisle light on, and began looking for the subject she needed. Above her, the florescent light flickered.

Not now, she thought. Just let me find what I need before you burn out.

The book she wanted was nowhere to be found. Frustrated, she began to search the area for something else she could use. Thankfully, her history subjects were organized chronologically, so everything she could want was in front of her. She scanned with her eyes, head tilted to the side, as the light above her flickered again.

Suddenly, there was a loud bang on the floor above her.

They’re going to come kick me out, she assumed as she scanned faster. She glanced at her watch.

The library was closed. No one had come down to make their rounds to tell her it was time to leave. She allowed herself five more minutes to find what she needed. She had the uneasy feeling that someone was watching her. She peeked around the stack but no one was down the aisle, nor should they be since the library was closing. She brushed off the queer feeling and went back to choosing a title.

Moments later the light above her flickered a final time and went out, but she was already pulling the book she needed from its place on the shelf. She shoved it in her messenger bag and bolted toward the stairs. She got to the top of the stairs and pushed the door but it wouldn’t move. Each level was actually a half level, each stairway being small and cramped with a door at each landing. The door had a window in it and Becca peered out but no one was blocked the door from opening. There was no handle; it would only push open. She pushed again, harder this time thinking maybe it was stuck. Nothing. There was no place for a lock that she could tell, but she also could not see the library staff diligently locking each and every stack door. They would be there all night.

Flustered and not wanting to be locked in the stacks for the night, she went back down the stairs and found her way through the maze of the stack to the east side of the building to the second set of stairs. After climbing them as well, she was equally disappointed to find that it was also sealed shut.

How the hell am I supposed to get out of here? Now she was beginning to panic. Becca was not one to overreact so she calmly made her way back to her side of the stacks, the side in which she was most comfortable. Before she could pull out her phone to call for help, she heard the same loud thump from the level above her.

She rushed to the top of the stairs again, hoping someone was there and would hear her banging on the door.

“Hello?” She called while banging her fist on the window. “The door is stuck, can anyone hear me?”

No one answered. The floor was eerily quiet. She reached for her phone but her heart sank when there was no signal to be found.

That’s when she heard another noise, shuffling footsteps. This time it was coming from level 3B. Someone was walking around in the stacks, down the aisles where she had just been.