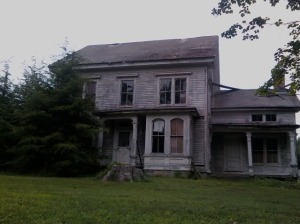 Welcome to the first post of BLOG FEST 2015!  This first tale is one that is loosely based on a story of a true account that happened to someone who retold it to me as a child.  This is only part one, so you can look forward to more tomorrow.

This is the story of Dessa and Trudy, two friends who spend the night in a haunted farmhouse.  What they don’t know is that there is a deadly secret in Dessa’s family and they are about to discover it…

Dessa’s grandfather had been dead for eight months. Her grandmother had moved on, but there were still boxes of his belongings that no one in the family had the heart to sift through. It was the last day of summer vacation and Dessa had to return home to her parents in the morning. She spent every summer with her grandparents at their farm in rural Calvert County. This was the first year she had her best friend Trudy with her and it was the first time she had finally convinced her grandmother to let them spend one night in the creepy farmhouse down the road. It was also the last time she’d get to see her grandfather.

“I’m so glad your grandmother is letting us stay in the haunted house!” Trudy was as adventurous as Dessa and the two teenagers had been inseparable since preschool.

They were walking along the dirt road that led from the main road onto the multiple acres that was the Dodson Farm, which was once the biggest tobacco farm in southern Maryland. The road was in fact their driveway, but along the way it passed several old barns and run down houses long since abandoned.

“I am too, but I’m telling you, this house is mega creepy.” Dessa replied. “You might not be thanking me before long.”

“It can’t be that creepy. It belongs to your grandmother, right?”

“Now. But it didn’t always belong to her.” Dessa lowered her voice as she told Trudy the legends of the house. The sun was sinking behind them and she was dramatic enough to know how to create the mood in any situation. “The Roseberrys owned the house decades ago before Bud Roseberry came home one night drunk and killed his whole family then took off.”

“That’s awful!” Trudy exclaimed. “Why on earth would your grandparents purchase a house with such a violent history?”

“Grandma always liked the house. She said it was pretty and would be a fun restoration project for her and PopPop after they retired. They bought it but never had the time or money to restore it. The land acquiesced to them and now it’s just sitting here.”

“What happened to Bud Roseberry?”

“Well, no one knows. He was never heard from again. Some say he killed himself, but others argued his body was never found. Others say he skipped town and assumed a new identity.”

“What do you think?” Trudy asked, encouraging her friend who she knew had the imagination to create a crazy scenario.

“I think he had a secret family and couldn’t keep it up anymore. I don’t know why he resorted to murder instead of just leaving, but I think he’s alive somewhere with a wife and more kids. Like nothing ever happened.”

Trudy had no response to that.

The sun had finally set and an eerie glow from the sky illuminated the house which now stood in front of them. The front door was hanging on its hinges and the shutters on the second floor were rotting from years of sun exposure. The first floor windows were boarded up and the glass was broken on the upstairs windows.

“Ok, I’m not afraid of ghosts,” Dessa began. “But I am terrified of the bugs we will most definitely be sleeping with tonight.”

“I hadn’t thought about that.” Trudy bit her lip. “I think we should be ok, though.  It’s kind of cool tonight, maybe the cold will keep most of them away.”

Dessa began to ascend the steps on the front porch. They creaked under her weight but held firm. Suddenly from upstairs, there was a sound of movement. The girls jumped quickly off the porch, holding each other’s hands, and looked up into the windows. There was no sign of life except for one of the curtains softly swaying.

Both girls knew there was no wind tonight.