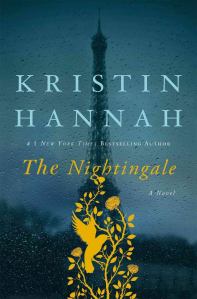 This is the story of Isabelle and Vianne, two sisters living in France during the time of the Nazi occupation. The two could not be more different from one another and that storyline is one that has been done before. The women have also had a tumultuous relationship with their father since the passing of their mother; another repeated narrative effect. What sets this book apart from other novels that have done the same thing is the way in which author Kristin Hannah weaves them all together.

Beginning the novel, and scattered intermittently throughout, is narration that takes place in 1995 by an unknown elderly women. As the story goes on, with narration from both Vianne and Isabelle from 1939 through 1944, the reader still has no idea who the woman of 1995 is. Which sister survived to tell the completed tale? Hannah has a remarkable ability to evoke raw emotions from her readers. I had to stop myself from crying on several occasions because I was at work! I think the best part of this book was its touch of humanity. Amid all the turmoil and heartache there is love, which sounds like a literary cliché, but it so refreshingly true. If every reader looks into their own life, can it not be said that they grow closer to people in times of strife?

Bottom line it, this was one of the best stories I’ve read in years. This book evoked every single emotion my body could muster. I laughed, I cried, I wanted to absolutely murder someone when I got so angry I could only see red. This book is fiction, yes. The characters are made up but the events in this story are true and were all too real for millions of people in occupied France during World War II. Everyone should read this book and see the evil that humanity is capable of and know that it could happen again unless we learn to LOVE. The ultimate theme in this book was love and how powerful it is. Kristin Hannah created such vivid and believable characters in Isabelle and Vianne. She captured the heart of what it means to be sisters and the meaning of courage and sacrifice. I recommend this beautifully written and almost poetic story to anyone, regardless of what genre you normally read. This book is relevant to everyone and I cannot say anything negative about it at all. Just read it.

One thought on “Book Review: The Nightingale by Kristin Hannah”