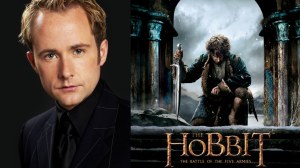 Since it was announced that Billy Boyd would be performing the credit song at the end of The Hobbit: Battle of the Five Armies, I have been anxiously awaiting the release. Since the release of the song, “The Last Goodbye,” I have been listening to it non-stop. On a personal level this song holds an enormous amount of emotion for me. I’m leaving tomorrow morning to move two states and multiple hours away from the only home I’ve ever known. Listening to this song in the car at night while I was driving alone after saying goodbye to yet another good friend was probably not the best idea. It was as if it was raining, only my eyeballs didn’t have windshield wipers.

The last time I discussed the power and the scope of credit songs, I compared the songs from the first two Hobbit films (you can find the post here). While I adore both songs, I have to admit that “I See Fire” was my favorite, but this time around, Billy Boyd has blown all the others out of the water. He is now tied with Annie Lennox’s “Into the West” for best performance of all six movies. The music is beautiful, Billy Boyd’s vocals are flawless, and the lyrics are so intimate and personal.

Under cloud, beneath the stars
Over snow one winter’s morn
I turn at last to paths that lead home
And though where the road then takes me
I cannot tell
We came all this way
But now comes the day
To bid you farewell

I bid you all a very fond farewell.

This new song accomplishes so much in its short four minute lifespan. First, it concludes the Battle of the Five Armies movie and entire Hobbit trilogy. Even if you have not read the book, the subtitle of this final film indicates a massive loss of life and pure devastation from the dragon and from war. This is more than little Bilbo Baggins could ever have imagined he would witness in his lifetime and the song is clearly from his point of view.

The next point about this song, and one that I feel should be obvious to anyone who has been committed to these movies since they first emerged almost fifteen years ago, is that this song wraps up an emotional experience for everyone involved in these films. Peter Jackson started filming The Lord of the Rings in the late 1990s. Yes, the 90’s! While I could write a long list of the differences (and some might argue many are for the worse) between the two trilogies, there is no lack of emotion, heart, and genuine love that went into the making of these films. From the director to the actors, to the folks who made everyone’s coffee at 3:00 in the morning, there was a sincere devotion to making these movies and that is why they will live on as classics, especially the groundbreaking and Oscar-winning Lord of the Rings. Billy Boyd, who played Pippin in those early movies, is the perfect person so present this farewell message. He performed the song “The Edge of Night” featured in the track “The Sacrifice of Faramir” on the Return of the King soundtrack, and as in his latest hit, his voice transports listeners to a haunting and war-torn Middle-earth.

The final accomplishment of this song is its ability to mirror the final song of the last trilogy, “Into the West” by Annie Lennox.

Why do you weep?
What are these tears upon your face?
Soon you will see
All of your fears will pass away
Safe in my arms
You’re only sleeping

[Chorus]
What can you see
On the horizon?
Why do the white gulls call?
Across the sea
A pale moon rises
The ships have come to carry you home

Hope fades
Into the world of night
Through shadows falling
Out of memory and time
Don’t say: “We have come now to the end”
White shores are calling
You and I will meet again

And you’ll be here in my arms
Just sleeping

Both songs talk about the journey west, though in two different dynamics. The relationship of night falling to a road that is calling is so poignant and appropriate to two sets of movies whose primary theme is the journey. These songs both sound so reminiscent of a joyful yet sorrowful time; the ending of battles, and the end of an era in film. And of course, both songs are from the perspective of the main hobbit character of each trilogy.

I think that this song will have an even more profound impact on viewers when they hear it for the first after seeing The Battle of the Five Armies. I am confident that if you are not already crying like a baby at the end of the film, you will be by the end of the credits.

One thought on ““The Last Goodbye,” An Ode to the Fans”