Today I have decided to try something different.  Instead of the routine choosing a picture and writing about it, I have chosen a series of pictures and put them together.  This was a fun challenge because it forced me to look at a big picture instead of one small image.  Of course, most writers know that even a few visuals cannot compare to a vast work of fiction or a whole scenario playing out in their minds so this is still an effective exercise.  I have focused on a famous concept, developed new ideas based on other people’s creative visual talents, and constructed dialogue (a first for this type of challenge) which know introduces characters.  This entry is slightly longer than most of my others but it is not quite a short story.  Who knows, perhaps this is the making of something bigger.  I hope you enjoy and please leave feedback, good or bad, since they are always useful for the future.  Thanks for reading!

She was named after the rose. Her hair was as red as fire, her face more beautiful than the fairest maiden, and her skin as soft as rose petals. Little did her parents know how much she would grow into her name. She was hearty and could survive in any weather, especially the cold. Her heart was as prickly as the thorns on the stem. Raised by a ruthless stepfather whose only amusement was torturing anyone who dared to defy his orders as king, she learned quickly to obey and feel nothing. As a child, she was taught that only a man could rule and that she had no place in the royal court besides the king’s royal chess piece. He would use her position as the queen’s daughter to exult himself as supreme ruler. He used her as a pawn. Marry this lord, he demanded one day but then changed his mind when he declared war with that lord’s country. She would accept ambassadors to the royal court and sit beside him at feasts and great occasions, but Rose could not remember the last time she looked him in the eye or even the last time he spoke to her. The day her mother died of the fever was probably the last day. That same day her father had her grandmother escorted to live in a grand estate in the country. He claimed it was for her health but Rose grew to believe the true reason lay with her. Her grandmother would not have rested until her granddaughter sat on the throne, her birthright, and her father would never allow such an opposition to reside within his walls. On the way to the estate, her grandmother and the escorts were viciously attacked by wolves who roamed the forest. The king saw an opportunity to isolate his kingdom and control it completely. He closed the castle gates and from then on, no one has been allowed to leave. But Rose harbored a secret.

One summer when she was but a girl, Rose was playing in the yard when she noticed some loose bricks in the castle wall. She pulled three bricks out and they made the beginning of a ladder. She climbed and loosened a few more bricks and before she knew it, she was at the top. She could probably see for miles if it was not for the winter that never seemed to cease. The wind blew the snow from days past around the mountain and the clouds brought new snow to the ground. But it was not this magnificent sight that attracted Rose’s attention. Her eyes instantly found the forest. It did not look as terrifying as the townsfolk made it seem. The people spoke of the howling of wolves in the distance, sinister and lethal. They told frightening tales of kidnapped children and lost maidens who were taken by the bloodthirsty hounds. Then there was the scariest story of all which told of how Rose’s grandmother, the Lady Meadows, was devoured by the hungry wolves with demons in their souls. The castle had become bleak ever since the passing of her mother and a young girl needed adventure. Rose climbed down the wall, but this time on the other side. When she reached the bottom she realized her only way back was the same way she departed lest she be found out by the guards and reported to her stepfather. She had to find her way back to this spot before nightfall so she tore the hem of her red cloak and wedged it between two bricks as a flag for when she returned, then she turned and made for the woods.

Rose was amazed with what lay beneath the haunting trees of the forest. Flowers of every color lined the floor, birds sang in the trees, and there was no snow to be seen. It was as if spring reigned eternal there and the winter had been forgotten. She saw rabbits munching on clovers and squirrels chasing one another along the branches of the fully blossomed trees. For a moment she contemplated stepping back outside the forest and then back in to see if her eyes were deceiving her, but she feared that she would wake up from a dream if she did, so she kept going. When she came upon a clearing in the forest, she saw a singular wooden door entwined amongst an old warped tree and its roots and branches. Rose thought it a curious thing to find. She wondered what it meant when she heard her name. Rose, the wind seemed to whisper. Rose, the leaves on the trees seemed to respond. Just then a ray of sun burst through the canopy and shone itself on the handle of the door. Without thinking any further, as if by some invisible power, she moved toward the door and opened it. She followed a winding staircase up through the tree. There were markings on the walls. Strange images stared at her as she ascended. The most common image, she could not help but notice, was that of the wolf.

Once she reached the top of the stairs, she entered through a stone doorway. She blinked and looked behind her. A stone doorway. Even as a child Rose wondered how it was possible to place a stone arched doorway inside a giant tree. When she reminded herself that the woods were in spring as full as the winter which raged outside, she decided it was only another question of the many floating in her mind.

“Come closer, my child.” She heard the voice but she could not tell from whence it came. She turned back to the doorway and saw a huge white wolf with piercing grey eyes staring back at her. Her heart skipped a beat as she gasped.

“Do not be frightened.” This time Rose thought she knew the voice. She did not have time to think about it further as the wolf bounded past her into the darkness that filled the rest of the room she stood in, if you could call it a room. Rose could not tell how far back it went nor if there was a way out. She certainly did not want to go back the way she came if that meant running into another wolf.

“To me, Rose.” Now the voice was across the way, in the direction where the wolf had gone. She froze, afraid to continue. The darkness began to fade and her eyes could make out the shape of a canopied bed. As the night retreated she could see a woman lying in the bed. Rose knew the woman. But it could not be her.

“Grandmother? But…you died.” She could feel a tear in the corner of her eye but refused to let it drop.

“It is not all as it seems, my dear.” Lady Meadows sounded as strong as the day she packed for the country estate. “My status of queen dowager died, my escorts died, even my own daughter, your beautiful mother died, but I have not. Though the king may believe he did, he could not command my death so easily.”

“I do not understand-” Before she could continue she noticed the white wolf was gone.

“Your stepfather ordered those escorts to slay me as soon as we entered the forest. When they drew their bows, I slew them instead. It would take more than two mediocre bowmen to take me out of this world.” She laughed and it was a true laugh, a hearty laugh. She caught Rose’s eyes wandering the room, looking for the animal. “Fear not, my child. That wolf shall not harm you. No wolf shall ever harm you.”

Rose looked at her uncertain but then she was overwhelmed by a surge of emotion and a desire to embrace her dead grandmother. She walked toward the bed but Lady Meadows had already opened her arms. The two held each other close. A young girl’s grandmother is her only window to the future and Rose believed that window to be long closed.

“How did you tame the wolf?” Rose asked as they parted.

Lady Meadows smiled. “I am the wolf.” 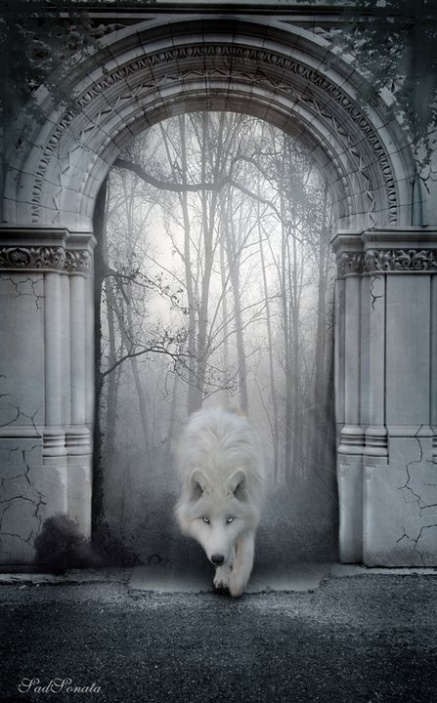 I am the wolf. The phrase echoed in her mind. Rose lay on her bed, staring at the ceiling remembering that day as if it happened only yesterday. It had been nearly five years since she first met her grandmother in the woods. The things Lady Meadows told her that day, and every day since, molded her and made her stronger. Every night Rose roams the grounds of the kingdom outside the walls, her beautiful wolf at her side. All is right with the world, or would be soon enough. Her eighteenth birthday was fast approaching and then she would come into her own. She could hear her grandmother’s words, We are going to take back your kingdom.